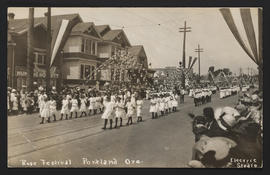 Photographic postcard showing girls in white dresses marching in the Rose Festival parade in Portland, Oregon. Each holds onto a streamer attached to a pole in the middle of the group. Writing on the bottom of the print reads, "Rose Festival, Portland, Ore. Electric Studio." 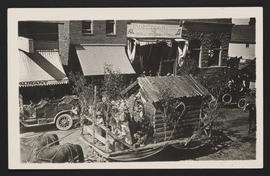 Photographic postcard showing a horse-drawn parade float in Prineville, Oregon. There is a miniature log cabin on the float, along with children dressed as pioneers. A sign on a building behind the float reads, "Foster & Hyde - The General Furnishing Store." Embossment on the bottom of the print reads, "Lafler, Prineville, Oregon." 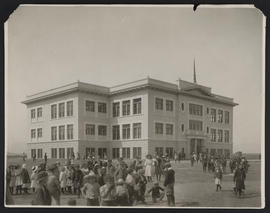 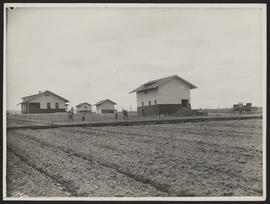 Farmers with children in field

Photograph showing 2 men and 2 children farming a field, likely in Kennewick, Washington. There is a farmhouse behind them, along with 3 additional structures. Handwritten note on the back of the print reads, "Kennewick, Wn." 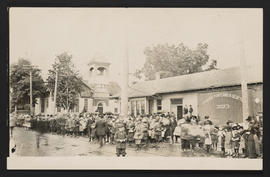 Photographic postcard of a large group of children waiting beside the railroad tracks at a train station. One child stands in the foreground and looks at the camera. A sign on the side of a building reads, "Spokane, Portland & Seattle 3073." Handwriting on back of postcard reads, "Hillsboro school children @ Hills. Taking train, OE Ry, to Forest Grove for county fair, 1913." 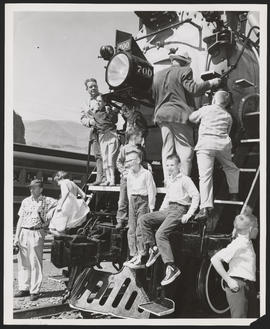 Photograph showing several children and adults posing on the front of an SP&S steam locomotive #700. One adult and child are still climbing the locomotive and have their backs turned to the camera. Handwriting on back of print reads, "Wishram excursion." Stamp on the back of the print reads, "W. LC. May 20 1956." 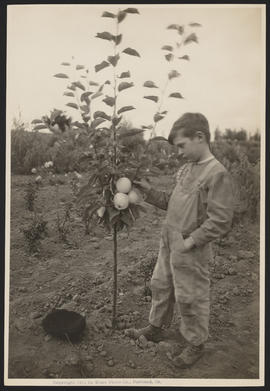 Photograph of a boy holding a branch of a small apple tree in an orchard at the Glen Cove Ranch near Scappoose, Oregon. Three apples grow on the tree. Handwritten note on the back of the print reads, "3 yr. Yellow Transparent Apple, Glen Cove Ranch near Scappoose. K9." Stamps on the front and back of the print indicate a 1911 copyright by Kiser Photo Co. 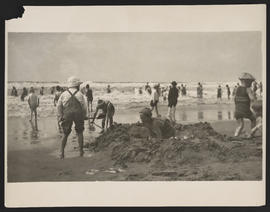 Photograph of a child digging a hole in the sand on a beach in Oregon. Another child stands next to the hole with a shovel. In the background, people stand or play in the ocean.