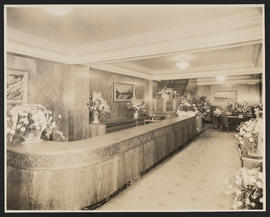 Photograph of a long counter at the Consolidated Ticket Office of the SP&S Railroad. The lobby is empty and there are several flower bouquets displayed throughout the room. Handwriting on the back of the print reads, "Consolidated Ticket Office. Opening April 2, 1928." Stamp on the back of the print for Arthur M. Prentiss, Commercial Photographer. 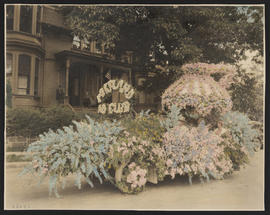 Photograph of people sitting in an automobile decorated with flowers for the Rose Festival in Portland, Oregon. The automobile is in front of a house. Flowers on the hood spell out "Portland Ad (?) Club." The photograph has been colored. Handwriting on the back reads "Prentiss" indicating this was likely taken by Arthur Prentiss.