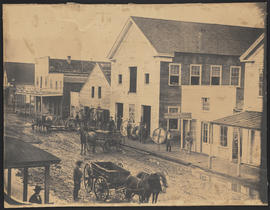 View of First Street in Portland, Oregon, in 1857 attributed to Lorenzo Lorain. The photograph shows the Union Hotel, Monnastes & David foundry, and Hop Wo Washing & Ironing. Several horse-drawn wagons are on the unpaved street in front of the buildings. Several men stand around large metal pieces in front of the foundry. A handwritten caption on the back of the photograph reads, "Portland, 1857. West side of First Street, between Yamhill and Morrison, showing the foundry owned by Monnastes & David, and the Union Hotel." 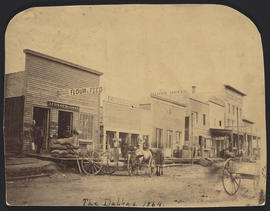 View of businesses in The Dalles, Oregon, attributed to Lorenzo Lorain likely taken between 1856 and 1857. Businesses on the street include J. Conser & Sons Flour & Feed, Metzger & Buch., and the Globe Hotel. There are several horses with carts and wagons on the dirt street in front of the buildings and several men stand in front of the buildings. A handwritten note on the front of the photograph reads, "The Dalles, 1864." A handwritten note on the back of the photograph reads, "From Mrs. S. A. Brown, 1830. Lorenzo Lorain photo, 1856."
Image note: Lorain was not longer in Oregon in 1864. If Lorain was the photographer, this image was likely taken in 1856-1857. 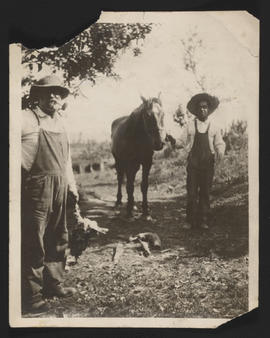 Ervin Flowers and Allen Flowers with a horse

A photograph of Ervin Flowers leading a horse down a path. Allen Flowers stands to the side. A handwritten note on the back of the photograph reads, "Ervin, Dad Flowers, and Maude." 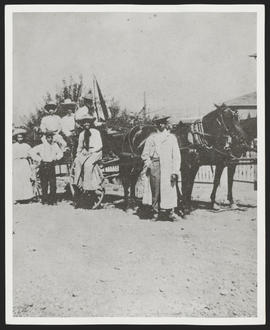 Flowers family on a horse-drawn wagon

A photograph of seven people seated in or standing beside a horse-drawn wagon on the Flowers family farm near Mt. Scott in Southeast Portland. A handwritten note on the back of the photograph reads, "On the farm. Leaving for picnic on the Clackamas River. Flowers Farm, Lents." 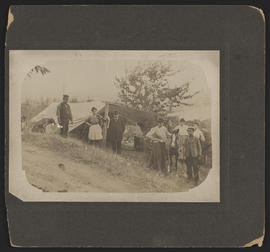 A photograph of a group of people standing in front of a tent on the Flowers family farm in the Lents neighborhood of Southeast Portland. A handwritten note on the back of the photograph reads, "Allen Elmer [sic.] Flowers Farm on north slope of Mt. Scott. about 1895. Across from Lincoln Park Cemetery." 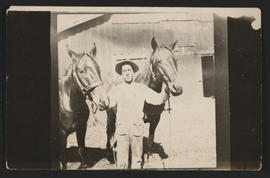 Ervin Flowers with horses on the Flowers farm in Lents

A photograph of Ervin Flowers standing between two horses in front of a barn at the Flowers family farm near Mt. Scott in Southeast Portland. A handwritten note on the back of the photograph reads, "Ervin Flowers on Farm."

A tintype in a paper mount depicting a group of children from the Boys & Girls Aid Society taking a ride in Lester Leander Hawkin's horse-drawn wagon, Jupiter. The wagon is parked in front of the Pioneer Post Office (today the Pioneer Courthouse) in downtown Portland, Oregon. A handwritten note from the back of the paper case reads, "L. L. Hawkin's Tally-Ho "Jupiter." 34 children taking a ride." 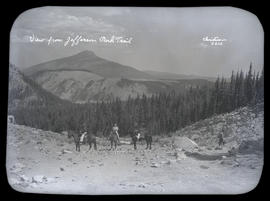 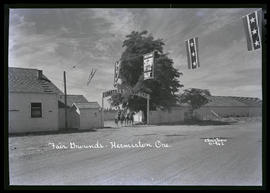 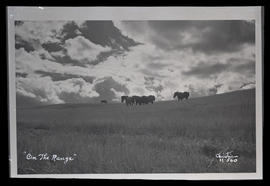 Negative of a photographic postcard showing several horses in a large, open field. There are clouds in the sky above. Handwriting on negative reads, "On the Range. Christian 11-560." 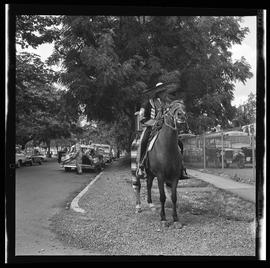 Man on horseback at Fiesta Days in Woodburn, Oregon

A man wearing traditional Mexican clothing sits on a horse at Fiesta Days, known today as the Woodburn Fiesta Mexicana, in Woodburn, Oregon. He looks to the right while the horse looks at the camera. Photographs from this series were published in the Valley Migrant League's Opportunity News on September 2, 1966. 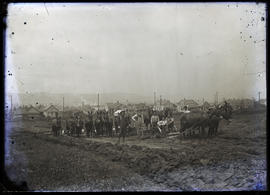 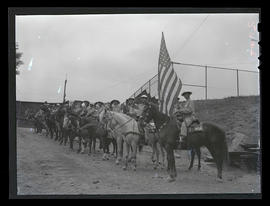 Photograph showing members of a civil defense organization on horseback, possibly at Multnomah Stadium in Portland. They are in a line and the riders are saluting. The number 2650 is written on the negative and is visible in the upper right corner of the image. This photograph is probably related to image Nos. 372A0797, 372A0799, 372A0800, 372A0801, and 372A0802. 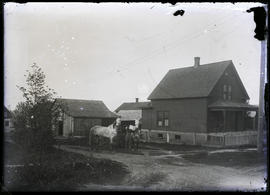 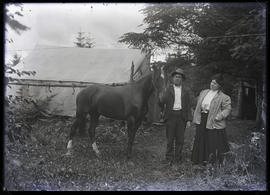 Portland residents with horse in front of tent, circa 1905

A man and woman stand next to a horse in a wooded area in front of a large tent in Portland. The tent is tied down to a long tree branch that has been fashioned into a post. 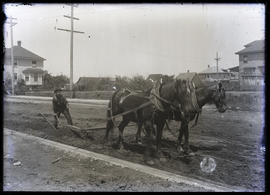 Horses pull equipment for street construction in Portland, circa 1905

Two horses pull a piece of construction equipment on a dirt road. A man stands behind them with one hand on the reigns and the other on the equipment. This is likely part of a street construction project. A horse ring is visible in the foreground on a curb bordering the dirt road. 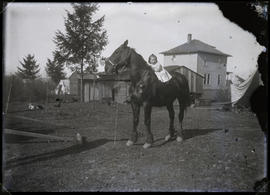 A little girl wearing a dress sits on a horse in a yard in Portland. A few chickens graze in the area behind them. A house is visible in the background. 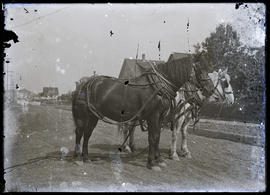 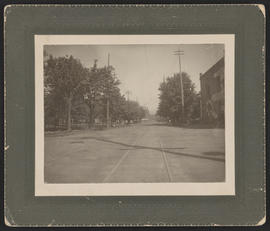 A view of a street in Portland, Oregon, with street car tracks in the road. A horse is emerging from a livery stable at the right of the photograph. A handwritten description on the back of the photograph reads, "Portland, 1895 - Livery Stable (r.)(3rd?)." 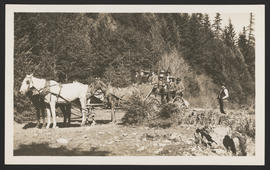 Photograph showing approximately 10 people sitting on a horse-drawn wagon in a rural area. Four horses pull the wagon. A man stands to the right of the wagon. Everyone looks at the camera. 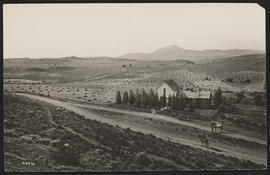 Photograph showing a view of a farm surrounded by a desert landscape in Central Oregon. Large agricultural fields stretch out behind a farmhouse in the foreground. A harvest is underway in the fields. Two people ride horses on a dirt road in the foreground. Taken from a nearby hillside. 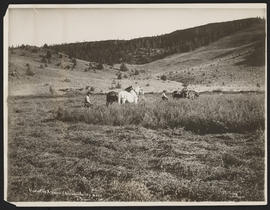 Harvesting alfalfa in the Ochoco Valley near Prineville, Oregon 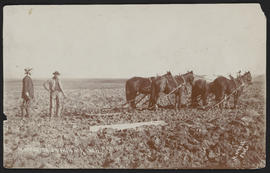 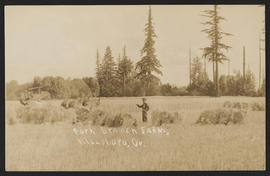 Photographic postcard showing 2 men using a horse-drawn machine to harvest crops in a field near Hillsboro, Oregon. On the right, one man sits on the machine. The other stands in the middle of the field and points toward the machine. Handwritten label on the bottom of the print reads, "Fork Branch Farm, Hillsboro, Or." 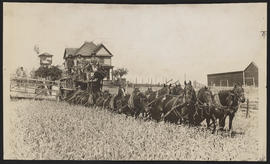 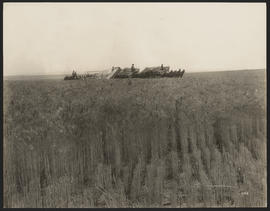 Photograph showing a harvest underway in a wheat field near Culver, Oregon. Farm workers pose on a line of machines and horse-drawn wagons used to harvest crops. Handwritten note on the back of the print reads, "Daniel Swifts wheat ranch, 160 acres. 2 miles south of Culver, Ore." 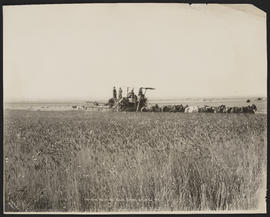 Photograph showing approximately a dozen horses pulling a combine through an agricultural field near Culver, Oregon. Four farm workers sit on the combine. Handwritten label on the bottom of the print reads, "Combine harvester near Culver, Crook Co., Ore." Today, Culver is in Jefferson County, Oregon. 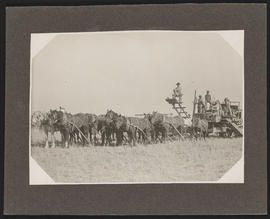 Photograph showing approximately a dozen horses pulling farm machinery in an agricultural field. Several farm workers sit on the machine. Handwritten note on the back of the print reads, "Culver, Ore."