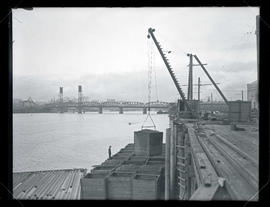 Photograph taken at Station L (now the Oregon Museum of Science and Industry) of hog fuel being unloaded via a derrick from a barge on the Willamette River. The Hawthorne bridge can be seen in the distance, as well as other boats. One person stands on the barge watching a crate being lifted onto the dock. 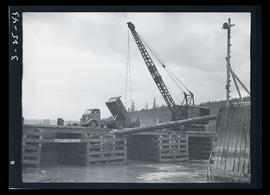 Photograph showing a man working with a truck and hoisting machine on top of a wooden dam structure. The man stands next to the truck. Water is visible at the base of wooden stucture, which appears to be filled with rocks. 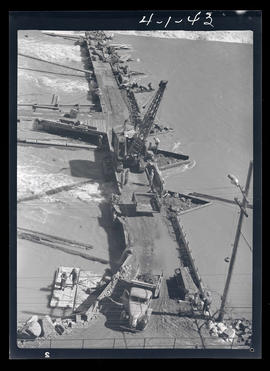 Photograph taken from a high angle showing several men working with a truck and hoisting machine next to flowing water of the Willamette River. On the left side of the image, two men stand on a dock platform while one holds a wooden pole. 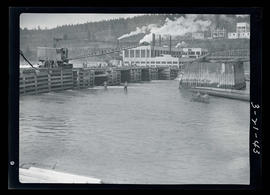 Photograph showing groups of men working on a dam in Oregon. Two men are standing in the shallow water, while another two are in a rowboat to the right. Another four men stand on top of the wooden structure to the left next to a hoisting machine. In the background, multiple smokestacks can be seen coming from a large industrial building.