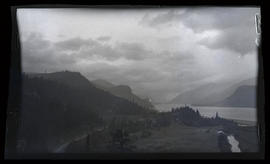 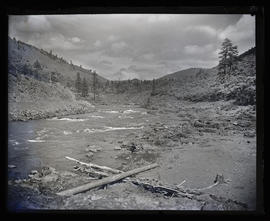 An unidentified woman in a black dress sitting in rocks on the bank oc the Klickitat River. The C. and N. R. R. train tracks are visible on the opposite bank. Caption from negative sleeve reads, "Klickitat [River], R-11, LW-11." Image note: photograph taken from the same vantage point as plates 7 and 36 in Album 712.