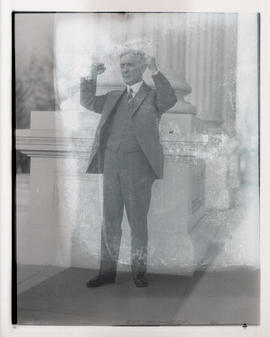 Full-length portrait of an unidentified man with upraised fists. He is facing to the left and is wearing a suit and tie. He is standing next to a column, probably at the Oregon State Capitol in Salem. Image note: Photograph shows extensive discoloration due to deterioration of the negative. 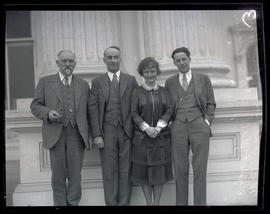 Portrait of three men and a woman standing in a row outside the Oregon State Capitol building. The text “M. F. Anderson — John P. Hunt — Elizabeth Glatt — A. D. Goddard” and the number 3 are written on the negative and are visible on the right side of the image. Hunt, Glatt, and Goddard are likely the chief clerk, assistant chief clerk, and reading clerk, respectively, of the Oregon State Senate. 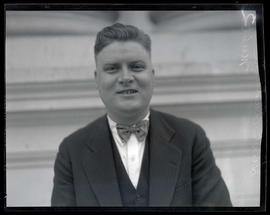