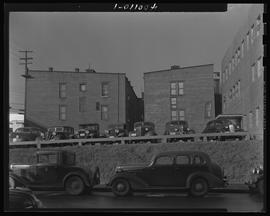 Automobiles parked, likely near Second Avenue on the eastside. 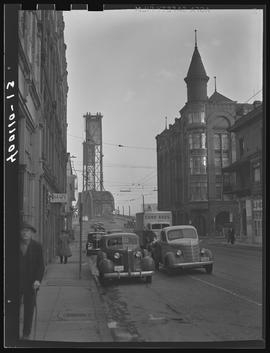 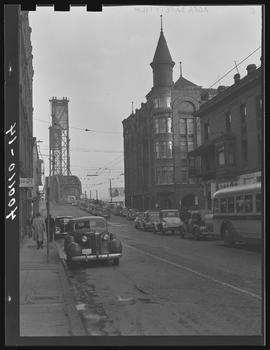 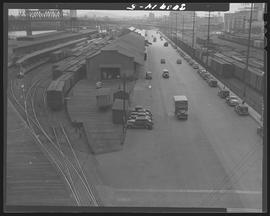 Rows of railroad cars sit on the tracks of a railroad yard at McCormick Dock, on Front Avenue. Looking south toward the Steel Bridge. Automobiles line Front Avenue next to another railroad yard. Taken September 14, 1939. 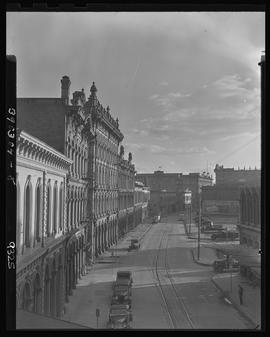 A row of buildings on Front Avenue, looking south from the Burnside Bridge. Demolition of Dekum and Reed block, at right, has begun. Automobiles are parked on the street and the trolley tracks are visible. Taken March 4, 1939. 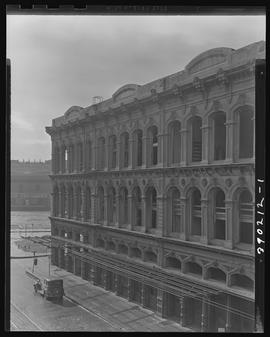 Building on Dekum and Reed Block

View of the Dekum and Reed Block, located on Front Avenue and Ankeny Street. Photo taken from south side of Burnside Bridge on February 12, 1939. An automobile is parked on the street and the Willamette River is visible in the background. Also visible are signs for a creamery and Golden Glow Beer & Ale. 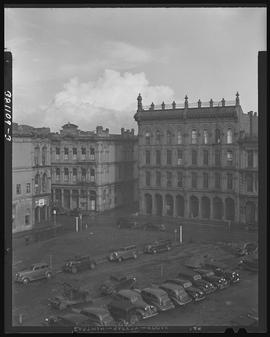 Cast-iron buildings on Front Avenue at Ankeny, from First Avenue. Probably taken from the New Market Theater. From left to right: the Dekum & Reed block, the Johnson Building, and the Dodd Block. Automobiles line the streets. Sign advertises Gadsby’s Home Furnisher. Several storefronts are for sale or lease. 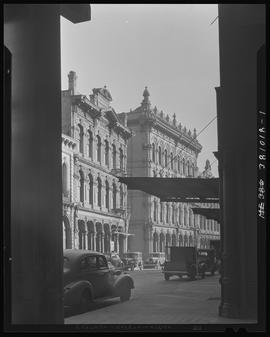 Buildings and automobiles on Front Avenue

Front Avenue looking south from under the Burnside Bridge, Oct. 18, 1938. The two buildings visible were, from left, the Johnson Building and Dodd’s Block, on the east side of Front Avenue facing each other across Ankeny Street. Automobiles are parked on both sides of the street.