Transcript. Monner discusses his career as a photographer for the Oregon Journal and the Oregonian. He discusses how he got his start taking aerial photos for Brubaker. He also talks about mountain climbing, his relationship with the Gypsies in Portland and the American Indians of the Warm Springs Reservation. 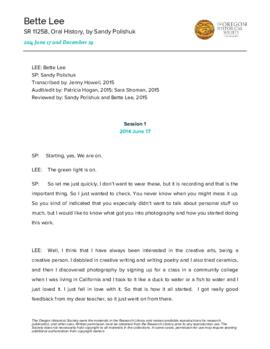 Transcript. Bette Lee discusses her activism and career in photographing protests, beginning in the San Francisco Bay Area in the 1980s, and later in Portland, Oregon. She discusses several specific photographs, many of which can be found in the transcript. Protests and movements discussed include the Portland Alliance, Indie Media, World trade Organization, Iraq War, Occupy Wall Street, Livermore Action Group, etc.