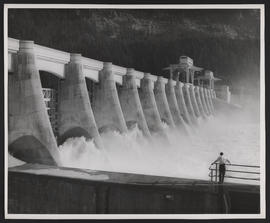 Photograph of water rushing out of the spillways of the Bonneville Dam in the Columbia River Gorge. Taken from the Washington side of the dam. A person leans over a railing on the lower right, watching the scene. A cloud of mist rises from the water. Stamp on the back of the print reads, "Restricted Photograph: Do not reproduce without written license agreement, Photo-Art Commercial Studios." 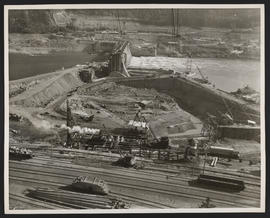 Construction of the Bonneville Dam

Photograph of a construction area located between the spillway of the Bonneville Dam and several railroad tracks. The Columbia River flows around the construction site and through the open spillways of the dam. There are 2 stamps on the back of the print. One is for Photo-Art Commercial Studios and the other for West Coast Engraving Co. 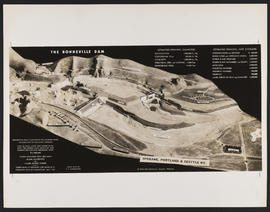 Model of the Bonneville Dam

Photograph of a model of the Bonneville Dam. The model was built by U.S. Engineers, and labels mark the main dam, spillway, fish elevators, power house, and more. A railroad in the foreground of the model is labeled "Spokane, Portland & Seattle Ry." Additional writing on the print indicates the quantities and costs involved in building the dam. Copyright on bottom of print for Photo-Art Commercial Studios in Portland.