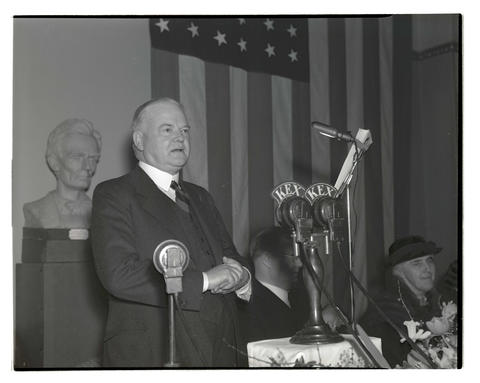 Photograph of Herbert Hoover standing at a microphone and delivering an address during a Lincoln Day banquet at the Multnomah Hotel in Portland on February 12, 1936. The banquet was held by the central committee of the Multnomah County Republican Party. In the background at right is Lou Henry Hoover. A cropped version of this photograph was one of four that were published on Page 6 of the Oregon Journal on Thursday, February 13, 1936, under the headline “Herbert Hoover Tells What He Thinks of New Deal in Lincoln Day Address in Portland, Heard Over Nation.” This photograph had the following caption: “Hoover stops as applause greets his repeated attacks on the policies of President Roosevelt in the nearly three years of Democratic rule in Washington.” The photographs accompanied the text of Hoover’s remarks, headlined “Hoover Talks of Confusion In Lincoln Day Address.” See related image Nos. 372A0293, 372A0294, 372A0295, and 372A0296.