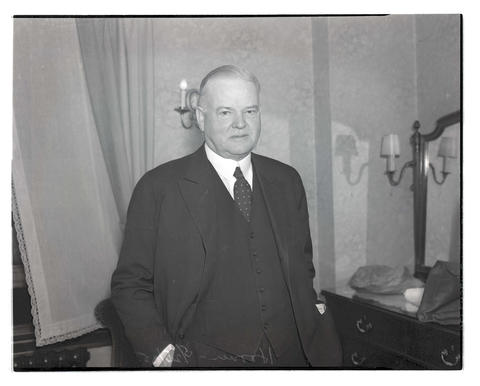 Half-length portrait of Herbert Hoover in Portland on Saturday, May 25, 1935. He is wearing a suit and tie and is standing with his hands in his pants pockets. A cropped version of this photograph was published on the front page of the Oregon Journal on Sunday, May 26, 1935, under the headline “No. 1 Republican Visits.” The photograph had the following caption: “Herbert Clark Hoover, former president of the United States, photographed in his suite at the Benson hotel Saturday evening. Mr. Hoover is en route East, and plans doing some fishing in Idaho.” The photograph accompanied a story with the headline “Oregon Fish Again Elude Mr. Hoover.” See related image No. 372A0291. Image note: The text “Hoover - 5/25/35” is written on the negative and is visible at the bottom of the image.