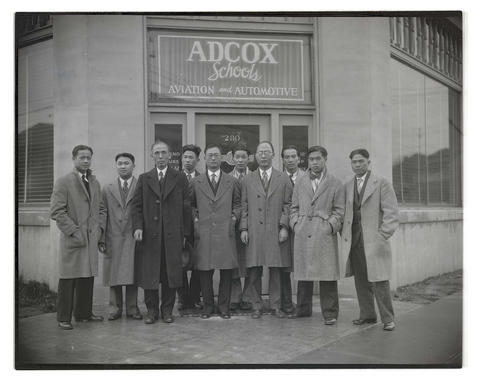 Full-length portrait showing ten men standing in a row outside the entrance to the Adcox Schools in Portland. A cropped version of this photograph and image No. 371N5592 were published on Page 24 of the Oregon Journal home edition on January 10, 1930, under the headline “Future Aviation Heads for China.” The photographs had the following caption: “Seven Chinese youths have registered at Adcox Aviation school, No. 280 Union avenue north, in line with announcement that such groups will be trained there at the Chinese government’s expense.” This photograph had the following additional information: “They are shown with Chang Tien-chieou, delegate of China’s ministry of foreign affairs, who accompanied them here, and local welcomers. From left—Herbert Lung, Moy Gee, Moy Lee of Portland; Edward Wong, Delegate Chang, Ralph Chong, Don Wing Moy of Portland; Michael F. Tom, Bennie Choye and Willie Low.” The photographs accompanied a story headlined “Chinese Take Up Aviation Here.” See related image Nos. 371N3468 and 371N6166.

Updated with additional information on January 3, 2019, and moved from Transportation, Aviation subseries to Education and Schools series.