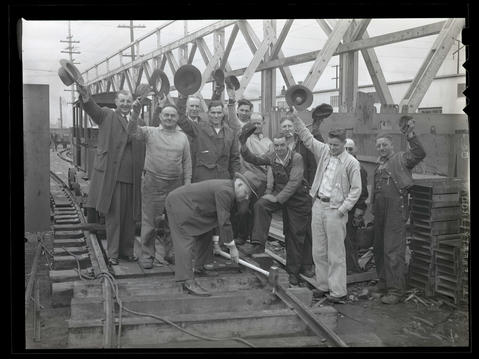 Photograph showing Albina Engine & Machine Works president George Rodgers holding a sledgehammer over the last spike for a new railway spur as a group of Albina shipyard workers doff their hats. A cropped version of this photograph was published on the front page of the Oregon Journal final edition on Saturday, November 7, 1942. The photograph had the following caption: “THE A. B. & T. RAILWAY (Albina, Berlin & Tokyo), Albina Engine & Machine works men call this spur from the main line to the yard, because it hooks up Albina with the waterfronts of the world. George Rodgers, company president, drives the ‘golden’ spike to complete the spur.” The number 122 is written on the negative and is visible in the lower right corner of the image. See related image No. 375A0393.