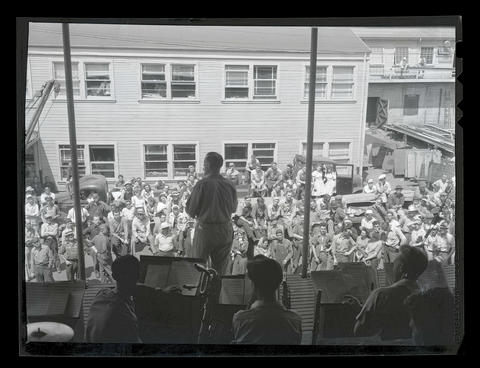 Photograph, taken from behind, showing George Buckle speaking to assembled workers at the Albina Engine & Machine Works shipyard in Portland on Wednesday, July 26, 1944. Members of the Albina Hellcats band are sitting behind him. They are in a second-story room open to the outdoors on one side, and the crowd is gathered below. A cropped version of this photograph was published in on Page 1, Section 2, of the Oregon Journal on Sunday, July 30, 1944. It had the following caption: “TO TACKLE THE PROBLEMS that war workers in the area face, the Working-Stiffs’ Forum is inaugurated at Albina. George Buckle, rigging superintendent, outlines the plan whereby shipbuilders at lunch hour meetings can discuss working and living problems in the area, and methods of improvement. In the foreground is the Hellcats band.” The photograph accompanied a story by Jean Muir headlined “Albina Workers Establish Forum.” Muir reported that the forum would meet three times a week at the lunch hour, with one meeting to focus on shipyard issues and the other two on general problems. Muir wrote: “Everything vital to the business of living during the war or in the postwar world will be open for discussion — from suggested improvements in working conditions to better food for the children and plans for worker security when the war is over.” See related image Nos. 375A0564 and 375A0565.