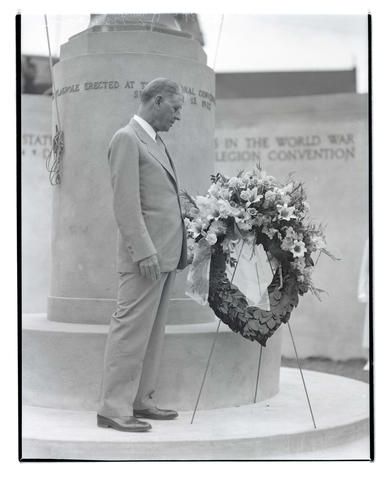 Full-length portrait of U. S. Secretary of War George Henry Dern standing next to a wreath at the cenotaph at Multnomah Stadium in Portland on the morning of August 3, 1934. The photograph was taken during a ceremony in memory of Canadian soldiers killed in World War I. A cropped version of this photograph was published on Page 4 of the Oregon Journal on August 3, 1934, under the headline “Dern Honors War Dead.” The photograph had the following caption: “Secretary of War George H. Dern placing wreath at the foot of the cenotaph at the Multnomah stadium, dedicated in June by the Canadian Legion to the Canadians who gave their lives in the World war.” The Journal reported that the ceremony was among the official events related to a visit by President Franklin D. Roosevelt, who arrived in Portland later the same day. See related image No. 372A0716. Image note: The text “Gen. Johnson” is written on the negative and is visible at the top of the image.