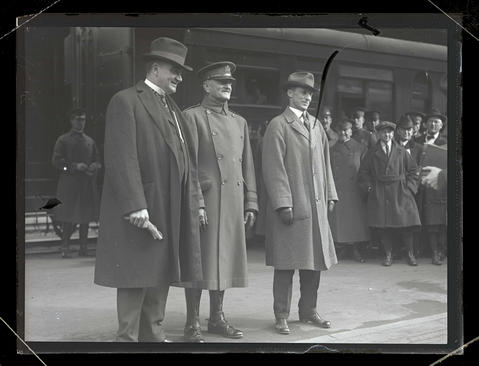 Full-length portrait of (from left) Portland Mayor George L. Baker, General John J. Pershing, and Oregon Governor Ben W. Olcott standing in a row at Union Station in Portland on Sunday, January 18, 1920. Pershing stopped in Portland during a tour to inspect military bases around the United States. Baker and Olcott greeted Pershing on his arrival at Union Station. A cropped version of this photograph, along with image Nos. 373G0156, 373G0160, 373G0161, and 373G0323, was one of seven published on the front page of the Oregon Journal on January 19, 1920, under the headline “A ‘Moving Picture’ of General Pershing’s Day in Portland From His Welcome at Train to His Farewell.” Also see image Nos. 373G0155, 373G0157, 373G0158, and 373G0159. Image note: Negative damage at upper right and left center.