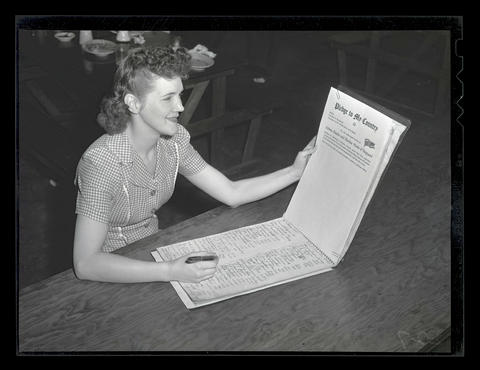 Photograph showing Francis Fieger, an employee at the Albina Engine & Machine Works shipyard in Portland, sitting at a table and holding open a large notebook. On the top page is the following text: “Pledge to My Country / And to / Franklin D. Roosevelt / President of the United States, as its leader, / We, the undersigned workers at / Albina Engine and Machine Works & Shipyard / builders of Subchasers, Portland, Oregon, aware that every man-hour counts in America’s War for Freedom, / do hereby pledge that we will refrain from taking even one hour off work unnecessarily, until the war is won. / May God give you and our country strength to achieve a glorious victory.” On the bottom page are two columns of handwritten signatures. A cropped version of this photograph was published on Page 15 of the Oregon Journal on Sunday, March 28, 1943. It had the following caption: “NATIONAL PLEDGE, which President Roosevelt and Secretary of Labor Francis Perkins say will be used as a national pledge to help curb absenteeism in defense plants. Francis Fieger, Albina worker, signs the document which originated here.” The photograph accompanied a story headlined “Pledge to Become National / Albina Plan Wins Honors.” According to the story, the pledge was signed by every worker in the shipyard and by management. Image note: The number 227 is written on the negative and is visible in the lower right corner of the image. The text “Albina shipbuilding” is written on the negative sleeve.