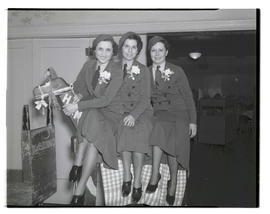 Photograph showing three flight attendants sitting on the Portland Breakfast Club’s wooden “ham horse” on Tueday, March 10, 1936. A cropped version of this photograph was published on Page 5 of the March 10 edition of the Oregon Journal. The photograph had the headline “Up in the Air on a Horse” and the following caption: “This trio of pretty United Air Lines’ stewardesses had breakfast Tuesday morning with the breakfast club, but their next meals were to be eaten many miles away. On the club’s ‘ham horse’ are (from left) Miss Aletha Cabie, who arrived Monday night from Salt Lake; Miss Gladyce Putnam, who ate lunch in Seattle, and Miss Sarabelle Milne, who will eat dinner in Salt Lake tonight.” The photograph accompanied a story headlined “Air Stewardesses Breakfast Guests At Club Meeting.” The meeting, held at the Multnomah Hotel, was sponsored by United, the Journal reported. See related image No. 372A0710. 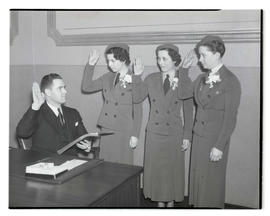 Photograph showing three flight attendants from United Air Lines (later United Airlines) standing in a row next to an unidentified man who is sitting at a desk and holding an open book. All four people are raising their right hands. The women are (from left) Gladyce Putnam, Aletha Cabie, and Sarabelle Milne. The photograph was probably taken at a Portland Breakfast Club meeting at the Multnomah Hotel on March 10, 1936. Putnam, Cabie, and Milne attended the meeting, which was sponsored by United. See related image No. 372A0709. 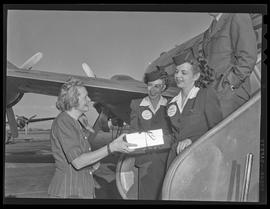 A woman hands two Western Air employees a gift, celebrating the arrival of Western Air Lines in Portland. The two employees, wearing flight attendant uniforms, stand on a set of stairs next to a plane (negative 2 of 6).