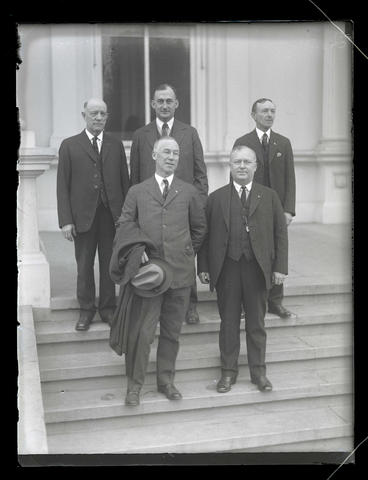 Full-length portrait of five men standing in two rows on the steps outside the Oregon State Capitol in Salem. The number 2 is written on the negative and is visible in the upper right corner of the image. A cropped version of this photograph and image Nos. 379G0163 and 379G0195 were published on Page 2 of the Oregon Journal city edition on Tuesday, January 9, 1923, the day after the legislative session began. The photographs were published under the headline “Old and New Faces to Be Seen at Oregon State Capital.” The photograph had the following caption: “Back row, left to right—Senators W. H. Strayer, Jay Upton and J. S. Magladry. Front row—Senators Robert S. Farrell and Gus C. Moser.”