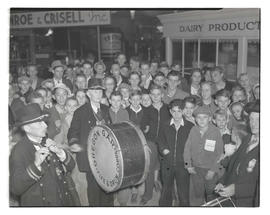 Photograph showing members of the Oregon Grand Army of the Republic Fife & Drum Corps performing at the annual Pacific International Livestock Exposition in Portland. Gathered behind them is a large crowd of children and teenagers. 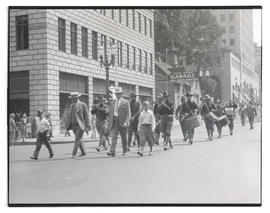 Portrait of two unidentified men and two unidentified boys in front of a fife and drum corps marching in a Portland parade. At left is the Pacific Building, located in downtown Portland between SW 5th and 6th avenues and SW Yamhill and Taylor streets. 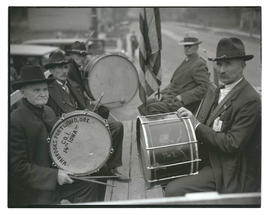 Portrait of five members of a fife and drum corps, possibly from the Grand Army of the Republic. The men are seated outdoors, possibly on the back of a truck. The man at left, William Henry Brooks, served in the Union Army during the Civil War. He played the drum he is holding as part of the drum corps during President Abraham Lincoln’s funeral procession. Brooks moved to Oregon in 1908. Painted on the drum is the text “W. H. BROOKS. PORTLAND, ORE. / CO, i. / 14TH iOWA iNF. [sic].” The other four men in the photograph are unidentified.