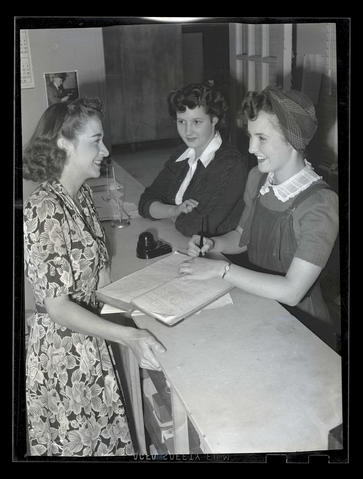 Photograph showing three female employees at the Albina Engine & Machine Works shipyard in an office, standing on opposite sides of a counter. The women at right, one of whom is signing a book, are joining a chapter of “No Work, No Woo” (N. W. N. W), a group whose members pledged not to date workers who hadn’t put in a full week’s time. A cropped version of this photograph and image Nos. 375A0741 and 375A0742 were published on Page 1, Section 3, of the Oregon Journal on July 4, 1943. This photograph had the following caption: “GIRLS RUSH TO JOIN THE UNION of workers and wooers. Not satisfied with an absentee record of 3.2 per cent for the yard, Albina girls plan to make the attendance record 100 per cent. Rosalie Holder, office worker and secretary of N. W. N. W., signs up Betty Langston and Louise Brundage, both duplicator’s helpers, who pledge themselves to date no absentees.” The photographs accompanied a story headlined “No Work, No Woo / Albina Girls Won’t Date Absentees.” Image note: The number 263 is written on the negative.