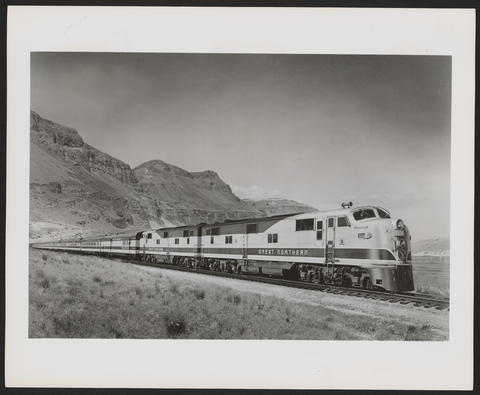 Photograph of Great Northern Railway's Empire Builder train traveling on a railroad track next to the Columbia River near Wenatchee, Washington. The train driver can be seen peering through the window. Typed note on the back of the print reads, "Great Northern Railway's new Empire Builder along the Columbia River near Wenatchee, Wash. The 12-car streamliner, drawn by a two-unit diesel locomotive, has a 45-hour schedule for the 2,211-mile run between Chicago and Seattle. Through a connecting train it also provides 45-hour service between Chicago and Portland. From: Public Relations Dept., Great Northern Ry., St. Paul, Minn."