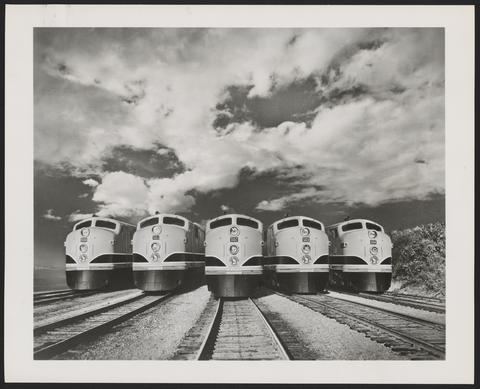 Graphic design image of 5 diesel electric locomotives, numbered 500 through 504, side-by-side on separate railroad tracks. Typed note on the back of the print reads, "This fleet of 4,000 horsepower diesel-electric locomotives will pull Great Northern's streamlined Empire Builder on a daily 45-hour schedule between Chicago, the Twin Cities and the Pacific Northwest. The power units already have been delivered to Great Northern. Construction of the five 12-car all-accomodation trains is under way with delivery scheduled for the last quarter of 1946, barring construction delays. Exterior colors of the new Empire Builder will be orange and green. From: Public Relations Dept. Great Northern Railway, St. Paul 1, Minn." Stamp on the back of the print for Hedrich-Blessing Studio in Chicago.