Item 372A0727 - Destruction on main business street after wildfire in Bandon, Oregon 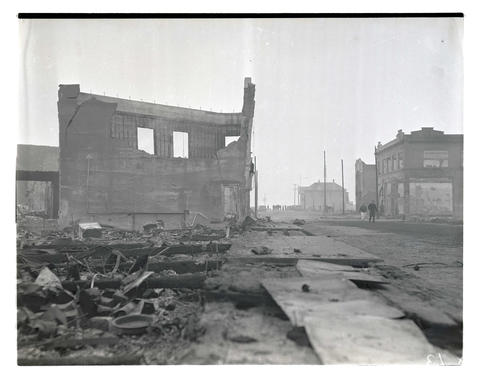 Destruction on main business street after wildfire in Bandon, Oregon

Photograph showing burned debris and walls still standing at the site of a building in Bandon, Oregon, after the town was destroyed by wildfire on Saturday, September 26, 1936. At right is a street, and in the background are three buildings still standing along the street. A cropped version of this photograph was one of seven that were published in a spread on Page 13 of the Oregon Journal on Tuesday, September 29, 1936. The photographs were published under the headline “Photographs Vividly Portray Horror of Holocaust Which Completely Destroyed Beautiful Bandon-by-the-Sea.” This photograph had the following caption: “All that remains of the main business street in Bandon. Even concrete walls yielded to the fire. The old frame city hall in the background escaped destruction by some miracle. It will probably be used as temporary coast guard headquarters.” Also see image Nos. 372A0724, 372A0725, and 372A0728, which were published on the same page as this photograph, and image No. 372A0722, which was published on the front page the same day. Image note: The text “x 13” is written on the negative and is visible in the lower right corner of the image.