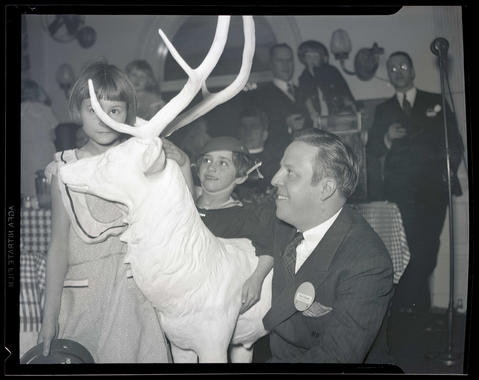 Photograph of a man crouching next to two unidentified children and a statue of a stag. He has one arm around the shoulders of one of the children, and he is looking left, toward the other child. She is standing on the other side of the stag statue and has one hand on its head. The man is wearing a round button with the name “Dan E. Gould” on it. This photograph may have been taken on December 18, 1934, at a Christmas party for orphans. The party was put on by the Portland Breakfast Club, of which Gould was president, and the children received gifts and gray tin helmets. A story about the party was published on Page 1 of the Oregon Journal on December 18, 1934, with the headline “Santa Claus Hails Orphans at Breakfast.” See related image Nos. 371N0477 and No. 371N2938, which were published with the story.