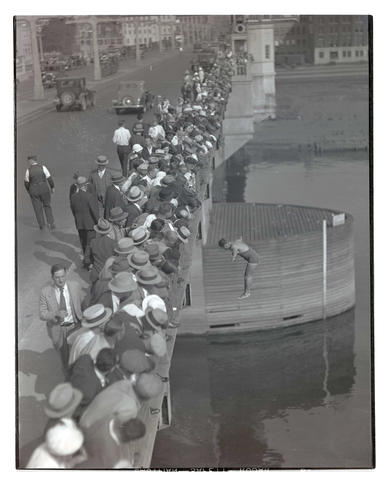 Photograph of a crowd watching diver Ray Moore in midair just below the Burnside Bridge on Thursday, September 6, 1934. A cropped version of this photograph was published on Page 21 of the Oregon Journal on Friday, September 7, 1934, under the headline “Try This One Before Breakfast.” The photograph had the following caption: “To Ray Woods of St. Louis, it’s just like eating corn flakes and cream. Here he is, just going into his back jacknife [sic] off the Burnside bridge Thursday afternoon as hundreds of curious Portlanders looked on. It was better than 80 feet down to the river’s oily surface.” The photograph accompanied a story about Moore’s successful dive, headlined “Diver Gives Thrill with Bridge Leap.” This photograph may be related to image No. 372A0629.