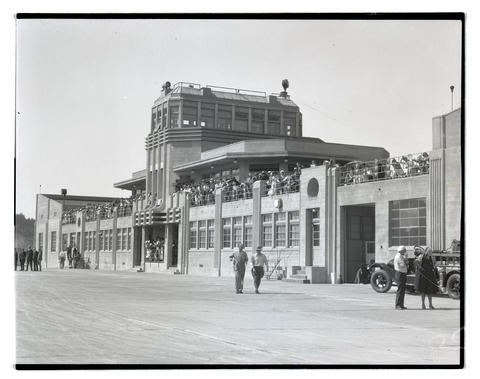 Photograph showing a crowd at the Swan Island airport terminal in Portland on Saturday, August 2, 1930, to watch the arrival of aviators on the Northwest Air Tour. A cropped version of this photograph was one of four published on Page 1 of the Oregon Journal on Sunday, August 3, 1930. The photographs were published under the headline “Crowd Welcomes Northwest Air Tour to Swan Island.” The photographs accompanied an article about the tour, headlined “Sky Rovers Tarry Here Over Night.” This photograph had the following caption: “A shot of the crowd on hand to welcome the fliers.” Image note: The number 5 is written on the negative and is visible in the lower right corner of the image.