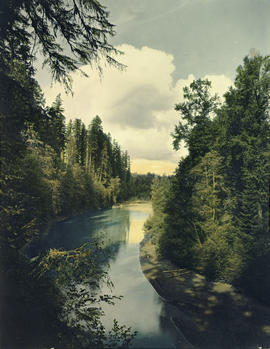 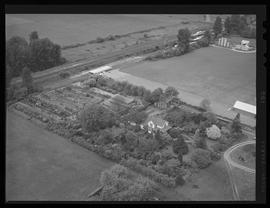 An aerial view of a farm in Woodland, Washington. A barn and rows of crops can be seen next to a house (negative 1 of 10). 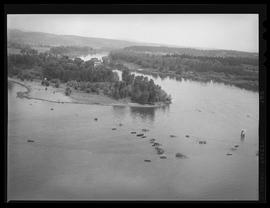 An aerial view of a river in Woodland, Washington, possibly taken at the confluence of the Lewis and Columbia rivers. A beach and boats can be seen (negative 2 of 10). 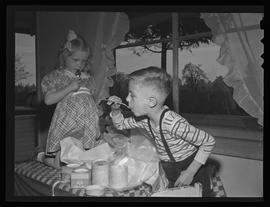 Albert Wyman, right, with his sister Jeanine, eating watermelon. Albert Wyman suffered from acute lymphatic leukemia. He leans over a table, holding a spoon in his mouth, while his sister watches. This photograph was published in the Oregon Journal on Saturday April 23, 1949 (negative 1 of 7). 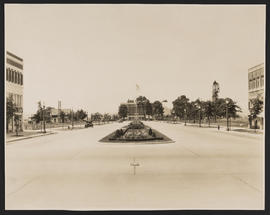 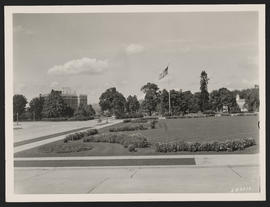 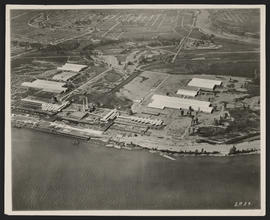 Aerial photograph of the Long-Bell Lumber Company in Longview, Washington. Typed label on the back of the print reads, "Airplane view of the greatest lumber manufacturing plants in the world, the operations of the Long-Bell Lumber Company at Longview, Washington. The two units shown here are operating on double shifts, turning out 1,800,000 feet of lumber daily. Buildings of these units cover 78 acres with roofing. Between the two units is the power plant which has a capacity of 18,000 kilowatts. Its two stacks are each 300 feet high. On the Columbia river can be seen a portion of the 200 foot lumber export dock which was partially under construction when the picture was taken." Writing on the bottom of the print reads, "L.B.A.8." 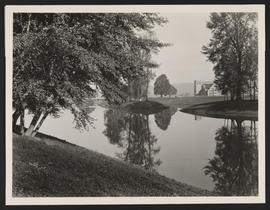 Photograph of Lake Sacajawea in Longview, Washington. Typed label on the back of the print reads, "Perhaps nothing demonstrates the attention given beauty in the new city of Longview, Washington like Lake Sacajawea park, a portion of which is shown in this view. Three years ago, this was an over-grown pond. Now it has been dredged out, planted in lawns and flower beds and shrubs. It lies crescent-shaped, one and one-half miles long among the residential districts of Longview, encircled by paved boulevards. The Longview Community shurch (sic) is shown reflected in its waters."

Panoramic photograph showing a bus operated by the Spokane, Portland & Seattle Railway, driving on a hillside road overlooking the Columbia River. Smokestacks are visible in a populated town on the other side of the river. The bus is likely on Highway 30 in Oregon and the town on the opposite bank of the Columbia River is likely Longview, Washington. An area of land on the Oregon side has been logged. Handwritten note on the back of the print reads, "Longview." Stamp on the back reads, "Photographs from A. J. Baker." Panorama is made up of 2 panels.