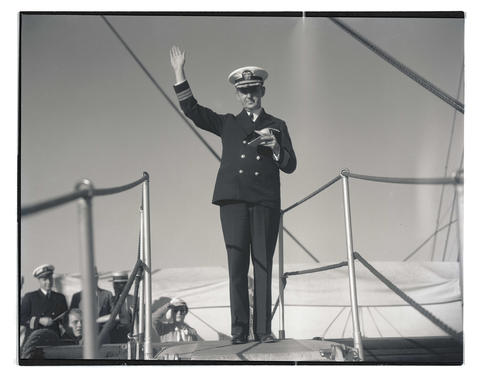 Photograph showing Commander Louis J. Gulliver, commanding officer of the frigate USS Constitution, waving from the top of the gangplank before the ship’s departure from Portland on August 22, 1933, after a three-week visit as part of a national tour. That day, a cropped version of this photograph and image No. 371N3705 were published on Page 9 of the Oregon Journal under the headline “Ending Triumphant Call of Grand Old Frigate.” This photograph had the following caption: “Commander Louis J. Gulliver of the frigate waves farewell to an appreciative and grateful city.” Image note: Light leak on negative.