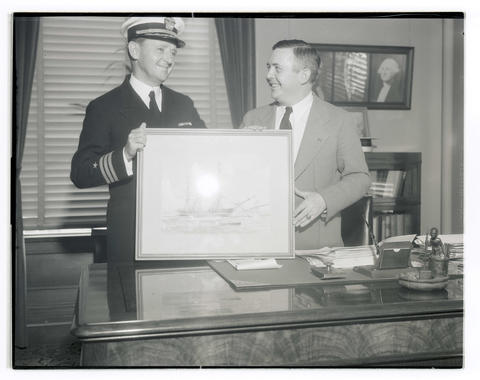 Photograph showing Commander Louis J. Gulliver (left) and Portland Mayor Joseph K. Carson holding up a framed picture depicting the frigate USS Constitution in Portland with the St. Johns Bridge in the background. The photograph was taken at Portland City Hall on August 26, 1933. The Constitution visited Portland from August 2 to August 22, 1933, as part of a national tour. Gulliver, commanding officer of the Constitution, returned to Portland while the ship was visiting Longview, Washington, to present the picture of the frigate to the city. The picture was created by artist Duncan Gleason of Hollywood, California.