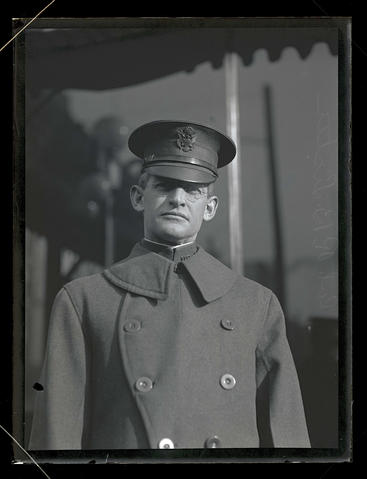 Colonel R. B. Lister on visit to Portland

Half-length portrait of a man facing front. He is wearing glasses, an overcoat, and United States Army visor cap. The name “Col. R. B. Lister” is written on the negative and is visible on the right side of the image. A story and a cropped version of this photograph was published on Page 15 of the Oregon Journal city edition on Friday, February 20, 1920, under the headline “Officers Training Inspector Arrives.” The photograph had the caption “Colonel R. B. Lister.” The story reported that Lister had arrived that morning on a tour to inspect schools under the Reserve Officer Training Corps. The Journal reported that he was met by Joseph A. Hill and Colonel W. H. C. Bowen of the Hill Military Academy and conducted an inspection at the academy. See related image No. 376G0368.