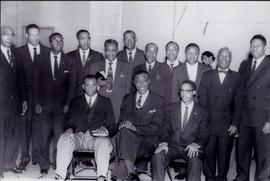 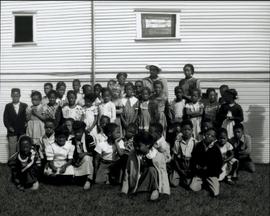 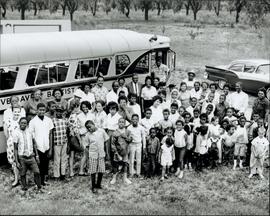 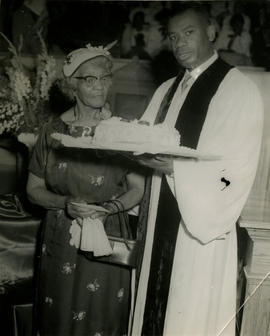 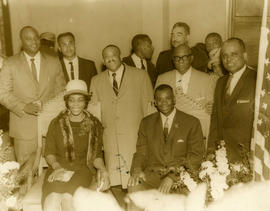 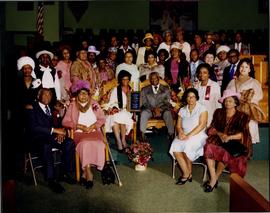 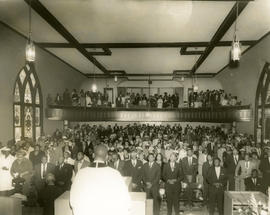 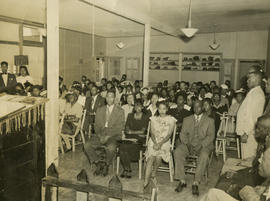 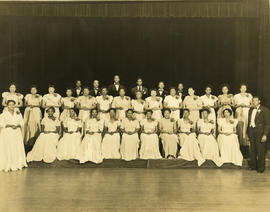 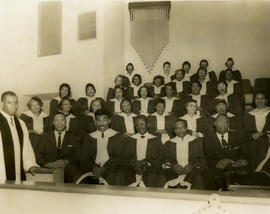 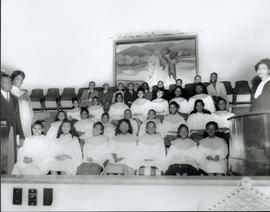 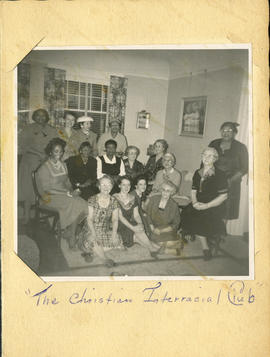 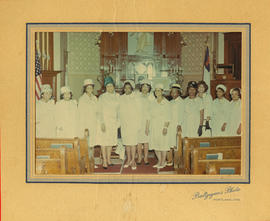 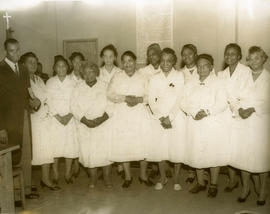 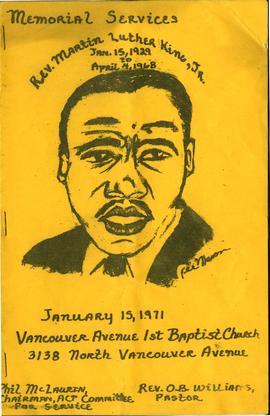 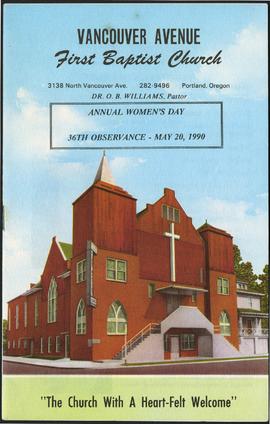 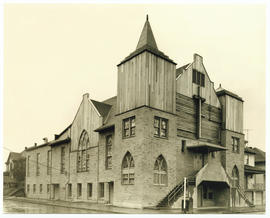 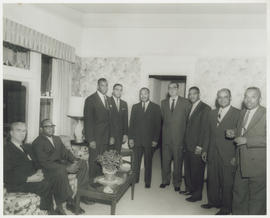 Vancouver Avenue First Baptist Church first began as the First Baptist Church of Burton Homes, an urban African-American church in Vancouver, Washington. It was formed in 1944 under the Rev. James William Brown. Most church members were employees of the Kaiser Company, which operated shipyards and the housing project of Burton Homes, among others. Soon after its formation, 26-year-old Reverend Oliver Booker “O.B.” Williams came to the Northwest with his new bride, Willa Ida Jackson-Williams. He took over leadership of the congregation in March 1945.

When the Kaiser Co. closed its Washington operations and Burton Homes, the church and many members moved to one of its other housing projects, Bagley Downs. When this also closed a year later, the church migrated in 1946 to the Albina area of North Portland, temporarily holding services in the Prince Hall’s Masonic Temple building at N. Rodney and N. Russell Streets. Here, the church and the St. James Baptist Church (which also occupied the Masonic Temple space) merged, with Rev. Williams as its spiritual leader. In 1947 Rev. Williams located a condemned building at N. Vancouver and N. Hancock Streets in northeast Portland, and with the help of the entire congregation rehabilitated the structure into their new spiritual home, naming it the Vancouver Avenue Baptist Church. That year the church joined the National Baptist Convention of America, and in 1948, it became affiliated with the National Baptist Sunday School and the Baptist Young Peoples Union.

By 1950, rapid membership growth caused Rev. Williams to seek out a larger gathering place. He found it at 3138 N. Vancouver Ave., just blocks away from its current location. The original church and parsonage, built in 1909, could hold 600 worshippers. The church took possession in March 1951. Also that year, under Rev. Williams, the Baptist State Convention of Oregon was officially organized, uniting local churches. The Convention created four initial organizational auxiliaries, including the Senior Mission, the Junior Mission, the Brotherhood, and the Ushers. In 1959 neighboring states joined the organization, and the name was changed to the General Baptist Convention of the Northwest. In 1968, Rev. Williams was elected president of the General Baptist Convention of the Northwest for a life term, in honor of his dedication and leadership. As membership surpassed 800, in 1955 Rev. Williams embarked on a renovation and expansion plan. This was completed in 1958, making the church the largest African-American house of worship in Oregon.

The 1960s brought the civil rights movement, and the church was actively involved. The highlight was Dr. Martin Luther King’s visit to Portland in 1961, where he met with local African-American church leaders, including Rev. Williams. Vancouver Avenue became a central polling place in North Portland for African-Americans. Also by the 1960s, the church had an exceptionally strong choir program, with seven full-voice ensembles.

In 1970, on his 25th pastoral anniversary, Rev. Williams received an honorary doctorate degree in theology from the Central Theological Seminary. On May 18, 1993, he passed away after illness, at the age of 76. He was survived by his wife Willa, who also received great accolades for her support of her husband and dedication to the church. She was actively involved in the National and Regional Baptist conventions, and received the “Woman of Dedication” award for 1977-78 from Church Women United.

Rev. Williams was succeeded by two pastors before Pastor J. W. Matt Hennessee was elected. He served as the church’s leader beginning in 2005.

The collection covers various aspects of the history of the church and of its leader, Rev. O.B. Williams, and his wife Willa Jackson Williams. It includes a variety of photographs, with a large percentage of the images relating to the various church groups, including choirs, youth groups, and ushers. A large collection of members’ memorial cards, the pastoral anniversaries of Rev. Williams, some bibles and hymnals (many annotated by Rev. Williams, including two dated 1867 and 1890), church financial records and meeting minutes, and a collection of materials from Dr. Martin Luther King’s 1961 visit are included. A small collection of the Williams’ personal photographs and ephemera can also be found in collection.

A guide to the full contents of the collection is available on Archives West: http://archiveswest.orbiscascade.org/ark:/80444/xv22418

Most of the materials in the collection were kept by Mrs. Willa Williams, wife of the church's long-time paster, Rev. O. B. Williams. The materials were eventually gathered by Raymond Burell, the church historian, who oversaw the donation to the Oregon Historical Society.

Videotape recording of Celebration of Life of O.B. Williams (1993) is housed in the moving image collection of the Oregon Historical Society.

Church artifacts, including choir robes, a podium, benches, and a stained glass window are held by the Oregon Historical Society Museum.

Materials from Lib. Acc. 28495 relating to the Central Methodist Church separated to Coll 474.

Online collection is only a selection of materials from the full collection. More information about this collection can be found here: http://archiveswest.orbiscascade.org/ark:/80444/xv22418