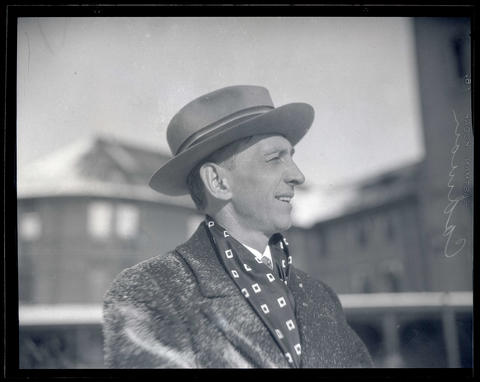 Head and shoulders portrait of composer Charles Wakefield Cadman facing right. He is outdoors at Union Station in Portland and is wearing a hat, scarf, and overcoat. A cropped version of this photograph, along with image No. 371N0135, was published on Page 18 of the Oregon Journal on January 20, 1927, the day Cadman arrived in Portland on a trip to plan that year’s Rose Festival pageant, of which he served as director general. The photographs were published under the headline “Getting Ready for June’s Roses.” See additional related image Nos. 371N0396 and 371N0393. Image note: The name “Cadman” is written on the negative and is visible on the right side of the image.