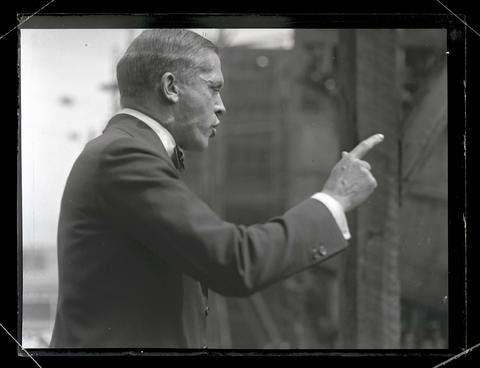 Photograph, taken from the side, of Charles Piez speaking to workers at Northwest Steel in Portland on July 13, 1918. Piez, vice president and general manager of the Emergency Fleet Corporation, made the address during a visit with director general Charles M. Schwab to inspect shipbuilding operations in the Portland area. A cropped version of this photograph was one of six that were published on Page 12 of the Oregon Journal on Sunday, July 14, 1918, as part of coverage of the visit. This photograph had the following caption: “Vice President Charles Piez in speaking pose.” See related image Nos. 373G0055, 373G0166, 373G0182, 373G0183, 373G0184, 373G0185, 373G0186, and 379G0077.