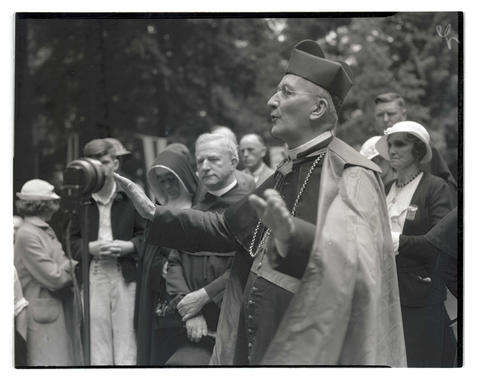 Photograph of Cardinal Alexis Henri Marie Lépicier speaking at the Sanctuary of Our Sorrowful Mother (The Grotto) in Portland on Monday, August 13, 1934. His address was part of the Marian Congress held at The Grotto from August 12 to August 15, 1934. A cropped version of this photograph and image No. 371N4251 were published on Page 1 of the Oregon Journal on Monday, August 13, 1934. The photographs were published under the headline “Local Sanctuary Grounds Mecca for Catholics.” This photograph had the following caption information: “His Eminence Alexis Henry [sic] M. Cardinal Lepicier, O.S.M. of Rome, making an international radio address today at the Grotto through the microphone of KOIN-The Journal. The program was given to the world by the Columbia Broadcasting system, being transmitted to Europe by short wave.” The photographs accompanied a story headlined “Clean Film War Lauded By Cardinal.” Image note: The number 26 is written on the negative and is visible in the upper right corner of the image.