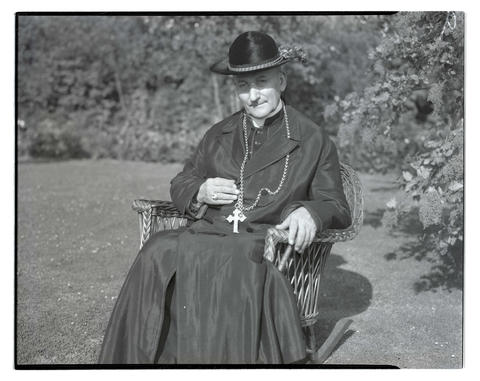 Portrait of Cardinal Alexis Henri Marie Lépicier at the Sanctuary of Our Sorrowful Mother (The Grotto) in Portland on Saturday, August 11, 1934. The cardinal traveled from Rome to attend the Marian Congress at The Grotto, held from August 12-15, 1934. A cropped version of this photograph was published on Page 1 of the Oregon Journal on Sunday, August 12, 1934. It had the headline “Portland Host to Distinguished Churchman,” and the following caption: “Alexis Henry [sic] M. Cardinal Lepicier, O. S. M., of Rome, prefect of the Congregation of the Religious, photographed Saturday in the rectory garden of the Sanctuary of Our Sorrowful Mother. He is here for the first Marian Congress ever held on American soil, in session the next four days at the Sanctuary.” The photograph accompanied a story about the cardinal and the Marian Congress, headlined “Church Held Major Need of Mankind.” Image note: The number 9 is written on the negative and is visible in the upper right corner of the photograph.