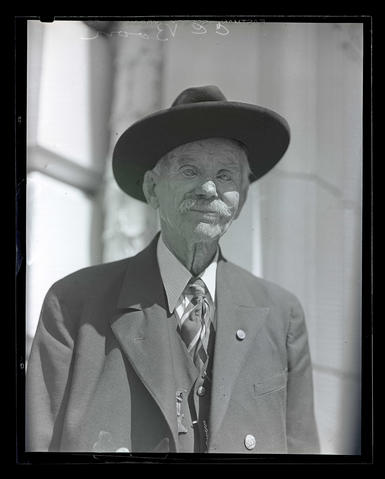 Half-length portrait of C. C. Boon, Union veteran of the Civil War. He is facing front and is wearing a hat, a suit jacket and vest, collared shirt, and tie. A cropped version of this photograph was published on Page 9 of the Oregon Journal on August 13, 1933. The photograph accompanied a story about Boon that was headlined “Civil War Vet Has Big Day on ‘Ironsides.’” The story reported that Boon, age 87, had traveled from Roseburg, Oregon, to Portland to see the frigate USS Constitution. The Constitution and crew visited Portland from August 2 to August 22, 1933, as part of a national tour. The story reported that Boon had been a sergeant in Company M of the Illinois Volunteer Cavalry. See related image No. 372A0064. Image note: Negative deterioration. The name “C C Boon” is written on the negative and is visible at the top of the photograph.

Updated with additional information and moved from People, Surname B subseries to Military and Veterans series on January 2, 2019.