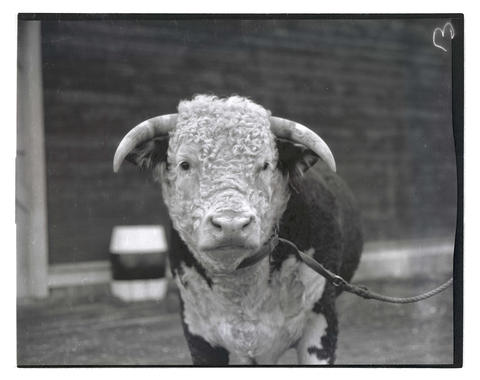 Photograph of a male Hereford yearling in Portland for the 1928 Pacific International Livestock Exposition. The number 3 is written on the negative and is visible in the upper right corner of the image. A cropped version of this photograph, along with image Nos. 374N0845 and 374N0848, was published on Page 12 of the Oregon Journal on November 2, 1928. The three photographs were published together under the headline “Some of the Champions Here for Week.” This image had the following caption information: “Bright Domino, senior Hereford yearling of the Mount Crest Farms, Hilt, Cal. He has been entered in nine stock shows in the United States and one in Canada so far this year and stands undefeated.”