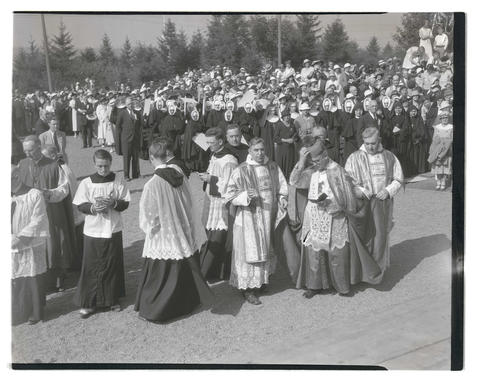 Blessing of altar at Marian Congress

Photograph of Archbishop Edward D. Howard (front, second from right) and unidentified clergy at the first open-air service of the Marian Congress on Sunday, August 12, 1934, in Portland. The Marian Congress was held from August 12-15, 1934. A cropped version of this photograph and image No. 371N4260 were published on Page 1 of the Oregon Journal on Monday, August 13, 1934. The photographs were published under the headline “Local Sanctuary Grounds Mecca for Catholics.” This photograph had the following caption information: “The Most Rev. Edward D. Howard of Portland carrying out the ancient and solemn rites of the Catholic church in blessing the open-air altar where the Marian Congress is being held at the Sanctuary of Our Sorrowful Mother.” Image note: The number 49 is written on the negative and is visible in the upper right corner of the image.