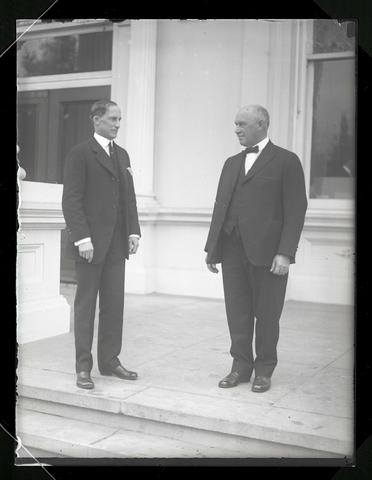 Full-length portrait of Ben W. Olcott (left) and Walter M. Pierce (right) standing outside the Oregon State Capitol in Salem. A cropped version of this photograph was published on Page 6 of the Oregon Journal city edition on Tuesday, January 9, 1923, under the headline “Retiring and Incoming Governors.” The photograph had the following caption: “Photograph taken in Salem, Monday, showing Ben Olcott (left), the retiring governor, and Governor Walter M. Pierce, standing together in the Capitol rotunda.” Pierce was inaugurated on January 8, 1923. The photograph accompanied a story about Olcott's final speech and the text of Pierce’s inaugural address to the Legislature.