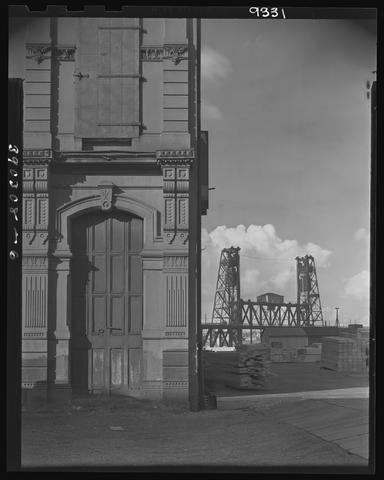 American photographer Minor White was born in Minneapolis, Minnesota, on July 9, 1908. After graduating from the University of Minneapolis with a degree in botany, White began pursuing photography. In 1937, he relocated to Portland, Oregon, where he joined the Oregon Camera Club. Within the year, White began a photography club at the YMCA. Shortly after his arrival in Portland, White was offered a position in the Works Progress Administration as a creative photographer for the Oregon Art Project. White spent the next several months photographing the Portland waterfront and the city's soon-to-be demolished cast-iron buildings. This project was completed in 1939, and the next year, White left Portland for La Grande, Oregon, to teach photography through another WPA assignment. Minor White photographed a great deal of natural scenery during this time. In 1942, White briefly returned to Portland, photographing the Knapp-Lindley and Dolph-Jacobs residences in a project commissioned by the Portland Art Museum. In April 1942, he was drafted into the U.S. Army.

After his return from World War II in 1945, White moved to San Francisco upon the invitation of fellow photographer Ansel Adams to teach at the California School of Fine Arts. In 1952, with the help of Adams and several others, White created Aperture, a magazine dedicated to creating a forum in which photographers could share their work and opinions. The following year, White moved to Rochester, New York, to continue his teaching career at the Rochester Institute of Technology. From 1959 to 1965, White returned to Portland annually to teach summer workshops that were known for their intensity and dedication to White's signature teaching of photography as a spiritual experience. In 1966, White moved to Boston, where he finished his career at the Massachusetts Institute of Technology. He died on June 24, 1976, at the age of 67.

White was perhaps best known for his expansion on the symbolist idea of photographic equivalents. Equivalent photographs (earlier espoused by Alfred Steiglitz) depict abstract images that are meant to suggest specific human emotions. For White, equivalents were a means to show the spiritual nature of photography.

A doorway on the SE corner of the Allen and Lewis Block at Front and Couch Streets. The Steel Bridge is in the background. Lumber is piled on the waterfront. Taken March 8, 1939.