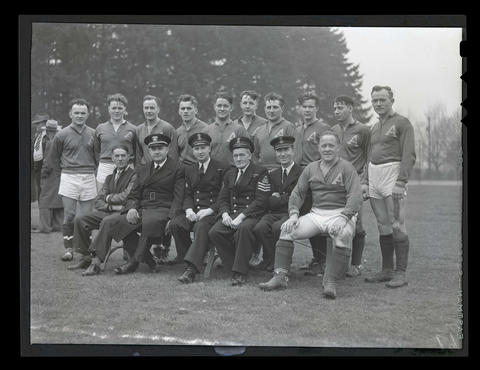 Photograph showing the members of the Albina Engine & Machine Works soccer team, the Subchasers, posing outdoors on a field with several men in uniform. In the back row, from left, are B. Carlson, R. Anderson, W. Carlson, B. Swank, L. Ottman, T. Doig, T. DeWitt, K. Anderson, E. Philipp, and K. Hunger. In the front row at far left is Dave Magill, the Subchasers’ manager; in the front row at far right is player S. Bergman. The second man from left in the front row is probably a U. S. Navy serviceman, and the other three may be members of the British Royal Navy. The photograph was probably taken in December 1942. A related photograph, image No. 375A0652, was published on Page 1 of the Oregon Journal sports section on January 3, 1943, along with a story about a soccer game to be played that day between the Albina team and a group of visiting British sailors. It was to be the second game between the two teams. Image note: The number 67 is written on the negative and is visible in the lower right corner of the image. The text “Albina shipbuilding” is written on the negative sleeve. Also see image Nos. 375A0651 and 375A0658.