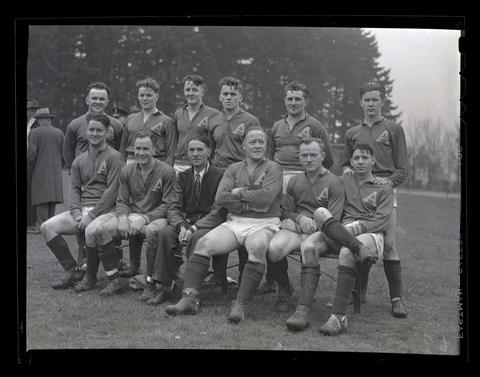 Photograph showing the Albina Engine & Machine Works shipyard soccer team posing in two rows on an athletic field. The players in front are sitting on a bench, and the players in back are standing behind them. The players are wearing matching uniforms with a letter “A” on their jerseys. A cropped version of this photograph was published on Page 2 of the Oregon Journal sports section on Sunday, January 3, 1943. It had the following caption: “DUE TO GALLOP TODAY—The Albina Engine & Machine Works soccer team, which will perform against the British Sailors aggregation this afternoon at 2 o’clock on the Columbia park field. From left, standing, B. Carlson, R. Anderson, T. Doig, B. Swank, T. DeWitt, K. Anderson. Seated—L. Ottman, W. Carolson, [manager] Dave Magill, S. Bergman, K. Hunger and E. Philipp.” The photograph accompanied a story headlined “Soccer Tilt Here Today / Visiting British Gobs Play Albina Eleven.” The soccer game was to be the second between the Albina team and a group of visiting British sailors. The number 69 is written on the negative and is visible in the lower right corner of the image. The text “Albina shipbuilding” is written on the negative sleeve. See related image Nos. 375A0650, 375A0651, and 375A0658.