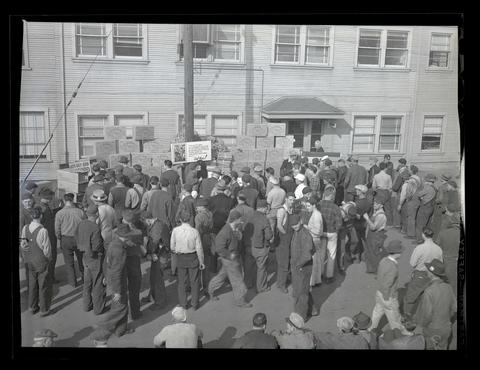 Photograph showing shipyard workers outside the office at the Albina Engine & Marine Works in Portland, waiting to contribute to a cigarette drive for United States troops serving in World War II. Boxes of Camel cigarettes are stacked next to the office. Hanging on a post is a sign about the drive, which features a photograph of Albina Engine & Marine president George Rodgers with Sid Woodbury IV. The sign reads: “In memory of his Father, Lieut. Sid Woodbury III, killed in 1940 / His seven-year-old Son, Sid Woodbury IV / Will match Albina carton for carton in the Christmas cigarette sale. / The Kid is wiling to shoot the works. Are we? / And How!” Image note: The number 91 is written on the negative and is visible in the lower left corner of the image. The text “Albina shipbuilding / Packing cigarettes for armed forces / 10/24/42” is written on the negative sleeve. The photograph was taken in October 1942 but the exact date is unconfirmed.