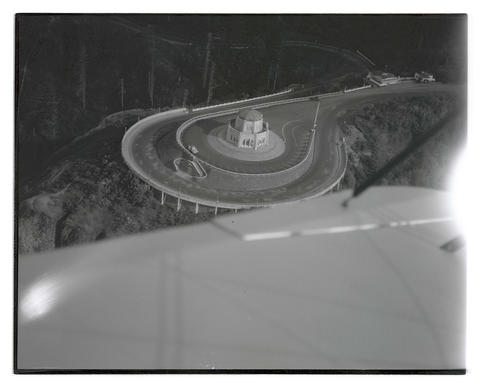 Aerial photograph showing Vista House and the surrounding Crown Point Viaduct in the Columbia River Gorge. The view is toward the east. The lower half of the view is obstructed by the wing of the airplane from which the photograph was taken. A cropped version of this photograph was one of 10 that were published on the front page of the Oregon Journal Sunday magazine on June 5, 1932. The photographs accompanied a story, headlined “Looping the Loop by Air,” that recounted an airplane trip following the route of the Mount Hood Loop Highway and described the views from the air. The photographs had the following caption: “Glimpses of familiar scenery snapped by Roy Norr, Journal staff photographer, in ‘doing’ the Mont [sic] Hood Loop the air way.” This photograph had the following additional information: “Crown Point as it looks to the sky rider.” See image Nos. 371N5698, 371N5703, 371N5704, 371N5716, 371N5717, and 371N5721, which were published on the same page as this photograph. Also see image Nos. 371N5699, 371N5700, 371N5701, and 371N5702, which were taken during the same trip. Image note: Light leak on negative.