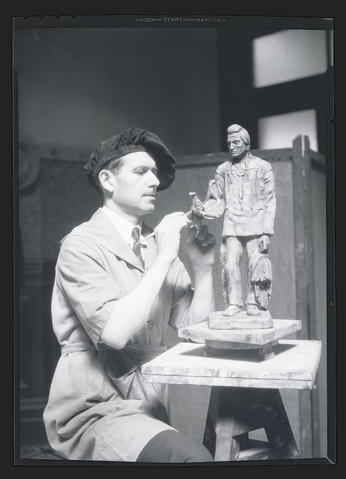 Portrait of an artist in a smock and beret, sitting at sculptor’s table and working on a sculpture of a Blackfoot man. A cropped version of this photograph, along with image Nos. 371N2894 and 371N2895, was published on Page 3 of the Oregon Journal’s Sunday magazine on August 13, 1933. The photographs accompanied an article about Voisin, titled “Adventures of a Sculptor Among the Blackfeet Indians of Montana.” This photograph had the following caption: “Adrien Voisin, Portland sculptor, with a figure of Two-Guns-White Calf, the model of the Indian head on the buffalo nickel.” Also see image Nos. 371N2896, 371N2897, 371N2902, and 371N2903.