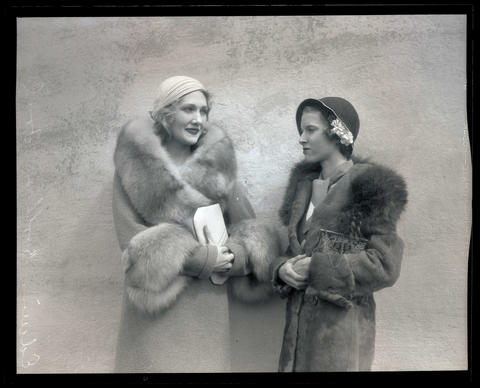 Portrait of two women standing next to each other. Both are wearing hats and holding handbags. The woman on the left, actress Edwina Booth, is wearing a fur coat. The woman on the right, Dorothy Ford of Portland, is wearing a coat and a fur stole and muffs. The photograph was taken in Portland on April 8, 1932, after Booth’s arrival in Portland. According to a story in the April 8 edition of the Oregon Journal, headlined “Movieland Trio Of Pretty Girls to Take Part in Ball,” Booth and two other actresses came to Portland to participate in the Eagles’ “Movie Ball,” a charity event. Dorothy Ford had been selected as queen of the ball. See related image No. 371N1406. Image note: The text “Edwina Booth + Ford” is written on the negative and is visible on the left side of the photograph. Faint discoloration in the center of the image is due to deterioration of the negative.