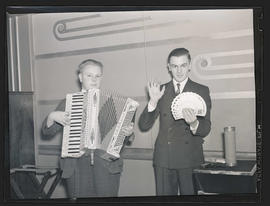 Portrait of two unidentified teenage boys, one holding an accordion and the other holding up a fan of playing cards. A cylindrical object and what may be a prop gun are lying on a small table next to the boy with the cards, possibly props for a magic act. 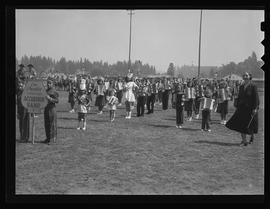 A band of accordion players, standing in a field in Oregon City, as part of the Oregon City Centennial in 1948. Two children hold a sign that reads “Eve Prentice Accordion Band, Southern Oregon.” At the right side of the frame is a holding holding a conductors baton (negative 2 of 19). 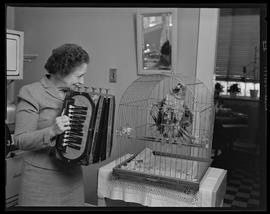 Grace Kern playing an accordion for a caged bird (parrot?), at her home at 1421 N.E. 21st Avenue. The home was built by Kern’s father in 1915 before being sold to the Lloyd Corporation in 1953 for development. She looks intently at the cage where the bird hangs onto the side with its claws and beak. Kern moved several architectural elements from the home to her new residence in southwest Portland. Photographs from this series were published in the Oregon Journal on Friday, July 31, 1953 (negative 4 of 8). 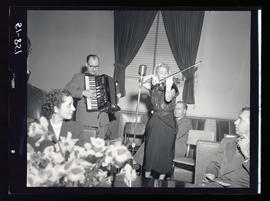 Man and women playing accordion and violin with microphone

Photograph showing a man playing an accordion next to a woman with a violin and bow. They are both facing forward and looking downward at their instruments, while seated individuals look on. Written on the negative is "51-851."