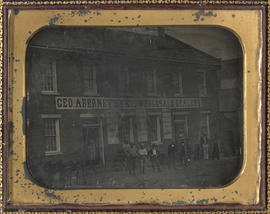 Cased photograph showing an exterior view of the George Abernethy & Co. store in Oregon City, Oregon. Several men pose outside the store. A sign on the building reads, "Geo. Abernethy & Co. Wholesale Dealers." Other signs on the building advertise various goods such as boots, nails, crockery and powder. George Abernethy was the Provisional Governor of Oregon in the 1840's. Legacy collection records indicate this may be the first brick building built in the state of Oregon. Records also speculate that the photographer may have been either Joseph Buchtel, who had a photo studio on the second floor of the building in 1857, or Holland and Day, who had a photo studio across the street in 1858. Case is made of wood and leather.