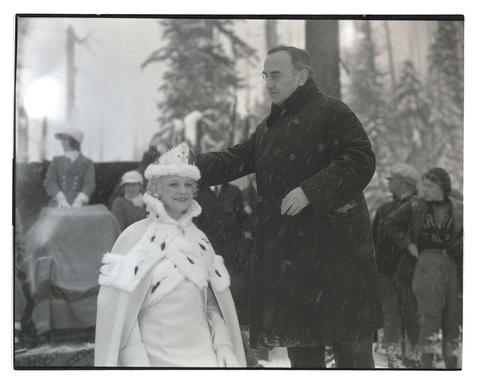 Photograph of Oregon Governor Julius L. Meier and Marie Dawson, queen of the 1933 Winter Sports Carnival, on January 22, 1933, at the foot of the Multorpor ski-jumping hill near Government Camp, Oregon. This photograph was one of five, including image Nos. 374N0490 and 374N0495, that were published on Page 1 of the Oregon Journal on January 23, 1933. The photographs were published under the headline “Some Views from the Court of the Queen of Snows.” This photograph had the caption: “Governor Meier is crowning Queen Marie.” The photographs accompanied a story, headlined “Winter Sports Events Viewed by Thousands.” Also see image No. 374N0554. Image note: Light leak on negative.